1. Ozone sanitization effective against Covid-19 The only one in the world scientifically validated

The Department of Molecular Medicine of the University of Padua conducted a study on the technology of our professional ozone sanitizers with the aim of verifying their ability to break down the infecting viral particles of SARS-CoV-2 (Covid-19) virus in interior within a closed environment (air and surfaces). The tests were performed by the team of Prof. Andrea Crisanti, Director and Scientific Responsible of the Department.

The results obtained have shown that our devices inactivate Covid-19, with a reduction in the viral load of over 99%. The same tests have documented that even when the exposure times are lower, the same viral inhibition (virucidal) activity goes beyond 92%, already with the first sanitization.

2. Study on the effectiveness of Sany-Water-Plus in reducing the microbial load in water

The study conducted by the accredited laboratory Chemical Analysis Centre of Padua has verified the ability of the Sany-Water-Plus professional sanitiser in eliminating over 99.98% of the main water contaminating microorganisms (in particular Escherichia coli, Staphylococcus aureus, Candida albicans). 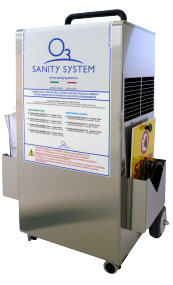 3. Study on the effectiveness of Sany-Water-Plus and Sany-Plus in reducing the microbial load in the air

The study conducted by the University of Padua - Department of Animal Medicine, Production and Health - ascertained the effectiveness of the air sanitisation treatment carried out with Sany-Water-Plus, in environments contaminated by microorganisms with particular characteristics of resistance and pathogenicity (Enterococcus faecium, Enterobacter cloacae and Escherichia coli). The study showed an average elimination of over 96% (Staphylococcus psedintermedius), 99% (Enterococcus faecium), 67% (Enterobacter cloacae) and 91% (Escherichia coli) of those pathogens. The results of this study are also extended to our Sany-Plus ozone generator, as they are compatible.

4. Report on the use and effectiveness of Sany-Plus in reducing hospital infections

The report "From Hand Hygiene to Ozonisers in the San Giovanni di Dio and Ruggi D'Aragona University Hospital of Salerno" by Dr. De Caro - risk manager of the A.O.U. - illustrates the advanced sanitisation protocols adopted in the hospital departments, and reports the positive results obtained with the Sany-Plus professional sanitiser, used to sanitise the entire structure in order to reduce hospital infections. The report was presented in the Campania Region on the occasion of the "National day for the safety of care and the assisted person: initiatives and experiences of the Campania healthcare facilities" 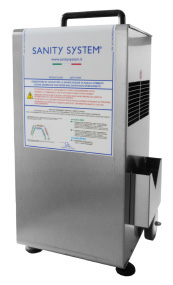 5. Study on the effectiveness of Sany-Plus in reducing the microbial load on surfaces and furnishing

The study conducted by the multinational pharmaceutical company Fareva shows that the Sany-Plus professional sanitiser has "excellent effectiveness in reducing the microbial load in the treated facilities." The study concludes that "the ozone sanitisation process responds perfectly to our requests", meets the contamination limits set by the standards currently used in pharmaceutical industries and has proven itself to be "less toxic than the technology previously used and to provide the possibility of resuming the work cycle almost immediately, without damaging any object inside the treated facility."

6. Test report on the effectiveness of Sany-Plus in reducing the microbial load on the surfaces of train cars

Tests conducted by the Testeco laboratory on behalf of the Russian Railways RZD certify that the sanitisation carried out with Sany-Plus "was fast and effective for the entire volume and surfaces of the cars". The positive results of this study are also extended to our Sany-Water-Plus ozone generator, as they are compatible.

7. Test report on the effectiveness of Sany-Car in reducing microorganisms in the passenger compartment of cars

Tests conducted by Intertek Group plc - a multinational company leader in the certification of electrical products - show that the Sany-Car professional sanitiser reduces microorganisms and pathogens present inside a car. In fact, the test report declares that "after 40 minutes of treatment, the mesophilic aerobic microorganisms went from 33 units to 1, while fungi and yeasts from 18 units to 0". This result was obtained with a single treatment. 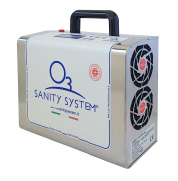 8. Study on the effectiveness of Sany-Car in reducing the microbial load on FFP2 masks and protective suits:

The study was conducted by the Department of Diagnostics and Public Health of the University of Verona, with the aim of verifying whether the ambulance sanitisation procedure activated by the Green Cross of Verona with Sany-Car "could have an effect not only on the surfaces of the vehicle, but also on FFP2 masks and protective suits used by the staff" placed inside the ambulance during sanitisation.

It should be noted that the bacteria used for the contamination of the samples of FFP2 masks and protective suits subjected to the tests were of the gram-negative type, which "in the scale of inactivation of microorganisms is at a higher level of resistance than viruses", including those "equipped with a viral envelope", among which "also SARS-CoV-2" (COVID-19).

Study conducted by the Department of the University of Verona

9. Test report on the effectiveness of our "Safe System" in the abatement of residual ozone and its conversion into oxygen:

The tests conducted by Environmental Efficiency have demonstrated the ability of the "Safe System", the conversion technology used by our sanitisers, to decay the ozone and convert it back into oxygen at the end of the sanitisation cycle and before the ozone generator is turned off. This restores a protected environment for workers, who can return to work in total safety. 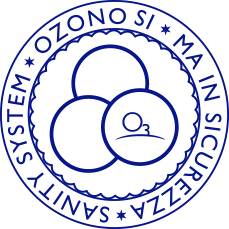 This mark indicates the compliance of our professional sanitisers with the essential requirements provided for by European legislation on safety, public health and consumer protection (Directive no. 89/392/EEC and subsequent amendments, Directive no. 89/336/EEC and subsequent amendments and Directive no. 72/23/EEC and subsequent amendments). Our devices, being appliances with power below 50 volts, are not subject to these standards, but we wanted to make them compliant with the most stringent European provisions on safety and public health to protect the health and peace of mind of our customers. The CE marking affixed to our products does not derive from a self-certification, but from a certification issued by an Independent Laboratory and supported by a technical manual of over 250 pages.

The PSE (Product Safety Electric Appliance and Materials) mark indicates that our devices comply with the technical requirements established by the strict Japanese legislation on the safety of electrical devices and materials (DENAN Law) and that they meet the high quality and safety standards required in that country. The PSE marking affixed to our products does not derive from a self-certification, but from an approval issued by an Independent Laboratory.

The FCC (Federal Communications Commission) mark certifies that our sanitisers meet the technical requirements of US regulations for electronic goods manufactured or sold in the United States. The FCC marking affixed to our products does not derive from a self-certification, but from an approval issued by an Independent Laboratory.

This certification documents that Sanity System meets the quality standards relating to production process established internationally. It also certifies our ability to meet customer expectations and maintain and improve over time the quality of products and services put on the market. 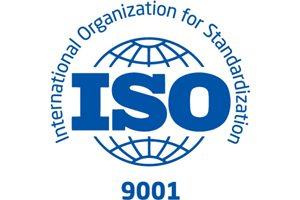 14. Enrolment in the AEE Register

As a user of packaging, our company joined this Consortium created for the prevention, recovery and recycling of the main packaging materials such as steel, aluminium, paper, wood, plastic and glass. Through the contributions of companies like ours, CONAI intervenes in support of separate collection and recycling of packaging waste.

All our ozone generators are entirely manufactured in Italy and comply with the requirements of Legislative Decree 81/2008 - Consolidated Law on the protection of health and safety in the workplace.